Despite female genital mutilation (FGM) being illegal in the UK since 1985, a 2015 prevalence study, part-funded by the Home Office, estimated that 137,000 women and girls who had migrated to England and Wales from countries where FGM is prevalent were living with the consequences of FGM.

FGM is a horrific practice with long term health consequences.  However, within practicing communities, it is a cultural tradition committed out of a misplaced belief that it is what is best for the girl or woman. The topic is incredibly taboo within communities, with very little information known or discussed openly. There is therefore a lack of awareness and understanding about the harmful consequences caused and ill-informed benefits are believed. We need to encourage discussion around FGM within practicing communities in the UK and help change attitudes and behaviours through education on the harmful and life-altering consequences.

Through this we arrived at our key overarching thought: THE CUT THAT LASTS A LIFETIME.

Using voices from within the community, we will educate our audience on the long-term harmful consequences FGM causes. We will demonstrate that FGM) is more than a single moment of pain; that it can cause a lifetime of negative consequences.

The creative explores this tension through juxtaposing soft, caring and familial images of people who have protected their children from FGM with the straight and matter-of-fact copy highlighting the risks to girls if they are cut. Using real families was key in unpacking the complex emotion that surrounds the practice.  The creative also reflects the range of people and communities affected by FGM and highlights that the whole family and community has a role in preventing FGM.

We have developed the creative in consultation with Home Office stakeholders, including FGM activists, survivors and charities, as well as drawing on insight from research with the target audience, signposting the NSPCC website and their FGM helpline for support, advice or to report a potential case. 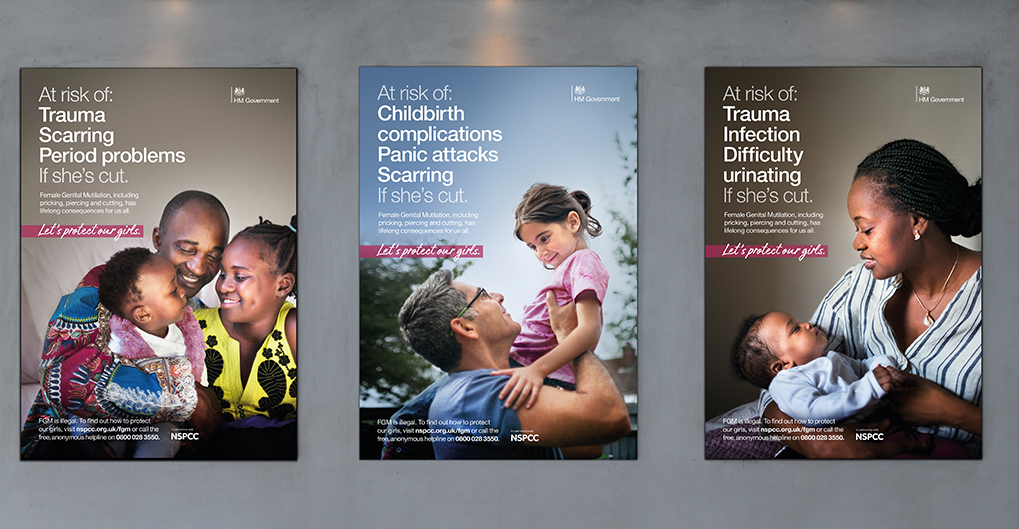